The decision also held that the city’s routine storage of DNA profiles from nonconvicted people in a permanent database violates state law.

It was a July night in East Harlem last year. K.N., 17, was riding in a car with a 22-year-old man near the Wilson Houses, a public housing complex overlooking the East River. The sound of sirens pierced the air. Two NYPD officers were signaling them to pull over, allegedly for illegal window tints.

K.N. and the man he was with burst open the car’s doors and ran. The two cops gave chase and eventually got ahold of them. According to police, when they got back to the car, the officers began a search. In the back seat, they found a loaded 9-millimeter Smith & Wesson with a large-capacity magazine. They drove to the 23rd Precinct, where officers found K.N. had no criminal record. Police made contact with his mother, who came to the station but was prevented from seeing her son, according to a court filing by his defense. Instead, the filing continued, police pushed the teenager to sign a form allowing them to collect his DNA sample. Then, without consulting his mother waiting outside, police inserted a swab into his mouth and extracted his forensic sample. (Manhattan prosecutors declined to answer questions from The Appeal regarding the DNA collection, but haven’t challenged K.N.’s account of the seizure.)

The collection of K.N.’s DNA is at the heart of a recent ruling that questions how the police seize DNA from juveniles. In a strongly worded decision drawing on Supreme Court precedent, Judge Sandra Roper of Manhattan criminal court ruled that since adolescents’ brains are still developing, they cannot legally consent to the search and a parent or guardian must sign off. The court also held that the Office of the Chief Medical Examiner (OCME), New York City’s forensics laboratory, is not permitted under state law to permanently store DNA taken from people who have never even been convicted of crimes. (The OCME did not respond to repeated requests for comment about the case.)

The Manhattan ruling is a “watershed decision protecting the genetic privacy of young people,” said Terri Rosenblatt, a staff attorney for the Legal Aid Society, the public defenders’ organization that defended K.N. Although the decision is not binding on other New York courts, Rosenblatt hopes it will encourage other judges to carefully consider controversial DNA practices that have become commonplace in New York City. Additionally, defense attorneys throughout New York can now point this decision to support their challenges of questionable DNA searches and retention practices.

In every other context imaginable, parental consent is required before a child’s personal information is taken, shared, or permanently stored – Terri Rosenblatt, Legal Aid Society

In an email to The Appeal, the NYPD disputed the judge’s constitutional argument, and contended that K.N. was “legally capable of providing valid consent for a DNA sample” because 17-year-olds are considered adults under New York State law. (Starting in October, under a new law, 17-year-olds will no longer be prosecuted as adults.)

Roper’s ruling could lead to changes in how the police department operates, said Joe Giacalone, a retired NYPD detective sergeant and an adjunct professor at City University of New York’s John Jay College of Criminal Justice. He believes it could prompt the department to bar detectives from collecting juvenile DNA without parental consent. “Once the department has been stung like this, the Legal Bureau will come up with an interim order to change how they do things,” he said. “Nobody wants to end up on a state docket deciding this issue, so they should come up with a procedure to fix this.”

Over the last two years, New York City’s large-scale collection and permanent storage of DNA profiles, including those from people found not guilty or who had their cases dismissed, have come under fire. Unlike in most major cities nationwide, New York City permanently stores suspects’ DNA profiles in a local database, even if they are later found not guilty. This vast collection effort means that, unless a defendant proactively seeks and wins a protective court order, their captured DNA profiles can be tested against any forensic evidence, gathered in the past or the future, at any time. While the OCME did not provide numbers on how often DNA profiles were expunged, the additional legal hurdle is a disadvantage for low-income defendants, argues Rosenblatt, because they are less likely to know about and have access to such legal options.

For defense attorneys, New York’s long-term collection of suspects’ DNA “is even more disturbing” when it comes to juveniles consenting on their own, Rosenblatt said. “In every other context imaginable, parental consent is required before a child’s personal information is taken, shared, or permanently stored,” she said.

For law enforcement, however, such age restrictions can feel like unfair impediments to their investigations. “Those 17-, 18-year-olds are part of the cohort that commit a lot of the crimes, so this will definitely hinder investigations into street robberies, gang activity,” said Giacalone. He said minors shouldn’t be exempted from routine DNA  collection based on their age alone. “After a while, what is the age gonna be? 125?”

But even if minors do consent to offering a DNA sample, as in K.N.’s case, they might not understand the implications of their actions. When K.N. agreed to the sample, his defense later argued in court filings, he was not informed that it would be held perpetually after the resolution of his case, regardless of its outcome. The police “led” him “to believe” the DNA would only be used for a one-off comparison, his attorneys argued, inducing him to consent to the swab.

Citing the lack of parental consent and his misunderstanding of the city’s DNA retention practices, K.N.’s lawyers moved in September 2018 to have authorities destroy and expunge any DNA sample or profile obtained from him, along with any comparisons of his sample or profile to crime scene evidence in the gun case. In a blistering ruling in November, Judge Roper assented to the expungement request, arguing that DNA searches of children without parental consent are inherently non-consensual.

“Adults, let alone terrified minors, are barely able to comprehend the grave consequences of surrendering their DNA to law enforcement,” she wrote in her ruling. “We as a society need to do more to treat juveniles at risk for societal banishment towards better penological outcomes through treating juveniles as children and giving them a better chance for rehabilitation for all of our sakes.”

The judge also ruled that the Office of the Chief Medical Examiner should stop permanently storing people’s DNA after a case if they aren’t convicted. Since New York state law does not explicitly authorize the permanent storage of non-convicted suspects’ DNA for the state DNA database, she noted, the law “must be read” to ban New York City’s practice “until the legislature acts to explicitly state otherwise.” She also argued that for people whose cases were dismissed, who were found not guilty, or who were later exonerated, such collection, which enables perpetual forensic examination, violates a previous state ruling barring DNA collection without probable cause.

Civil liberties advocates have also criticized other NYPD methods of collecting DNA for the city’s permanent suspect database. In pristine interrogation rooms, officers will sometimes offer arrestees bottles of water and cigarettes, not as a gesture of sympathy, but as a surreptitious method of acquiring the DNA suspects subsequently “abandon” in precinct trash cans or ashtrays. Their DNA samples can then be processed into profiles and entered into the permanent database without the person’s knowledge, making proactive court requests for database expungement highly unlikely.

An NYPD interrogation room video obtained by The Appeal shows such covert techniques in action (the footage has been edited to obscure faces, and shortened for publication purposes). At the beginning of the footage, a white-shirted NYPD investigator can be seen vigorously scrubbing the interrogation room table. A colleague in a red shirt walks in and places an ashtray on the cleaned table. Thirty seconds later, they bring in the defendant, read him his Miranda rights, and tell him he has been arrested for allegedly discarding a firearm while running from police. He declines to answer questions and subsequently declines the white-shirted investigator’s offer of a cigarette. The two leave him in the room alone, where for about five minutes he leans over the table, plays with his hands, and shifts in his chair. Finally, he knocks on the door, and accepts the offer of the cigarette.

The red-shirted officer goes to get it and comes back in chuckling, even lighting it for him. The defendant smokes for about six minutes, then ashes it. After several more minutes, the police come back, ask him if he’s finished and whether he wants to talk. He declines, they leave, and his arresting officers come to escort him out. Just over a minute after he leaves, the officer who gave him the cigarette comes back into frame. Wearing gloves, he dumps the cigarette butt into an evidence envelope and exits the room.

Rosenblatt says New Yorkers would probably be “horrified,” if they knew such surreptitiously collected samples “are stored in a city DNA databank forever, even if the person is ultimately not convicted of any crime, or simply released without further questioning.”

From a police perspective, Giacalone argued that surreptitious collection is a superior technique to voluntary swabs because they are harder for defense attorneys to challenge. “The consent always opens up a can of worms,” he noted. “It becomes a he-said, she-said.”

Public scrutiny of New York City’s DNA practices grew after The Trace and WNYC reported on the rapid and quiet growth of New York City’s DNA database, fueled by authorities’ push to collect DNA in every case in which a gun is recovered, and the Office of the Chief Medical Examiner’s decision to permanently store profiles of nonconvicted suspects.

In a contentious New York City Council hearing on this issue in December 2017, OCME officials acknowledged they could choose to remove samples of nonconvicted individuals from their database if they want to, but argued such inclusion benefited authorities because it enabled more matches in cases beyond those individuals are first suspected in. At the time, Florence Hutner, OCME’s general counsel, told lawmakers, “There is nothing prohibiting the storage of the profiles of unconvicted individuals.”

New York City’s broad DNA collection practices are not unprecedented nationwide. Police in other states, such as California, Florida, Pennsylvania, North Carolina, and Connecticut, also collect and retain the DNA of those arrested but not convicted of certain charges.

Last year, California’s Supreme Court upheld the practice of collecting and storing felony arrestees’ DNA, despite civil liberties advocates’ complaints that such broad collection methods disproportionately affect Black residents, who are more likely to be arrested and exonerated after such arrests. In December 2018, a group of civil society organizations, including the Electronic Frontier Foundation, sued the state, pointing out that though over 750,000 people have been arrested on felonies and ultimately released between 2009 and 2017 in California, fewer than 2,000 had their DNA subsequently expunged from police databases.

Rosenblatt hopes that Roper’s ruling could help change the city’s practice of permanently storing minors’ DNA, which she calls “especially disturbing.” “Young people who are charged with crimes should have a chance to move on and have a productive and law-abiding life,” she said. “Storing their genetic code forever keeps them under a microscope.” 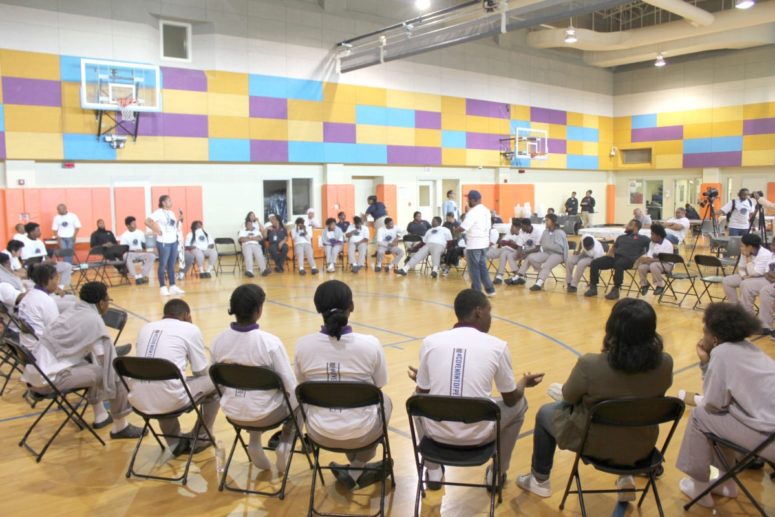 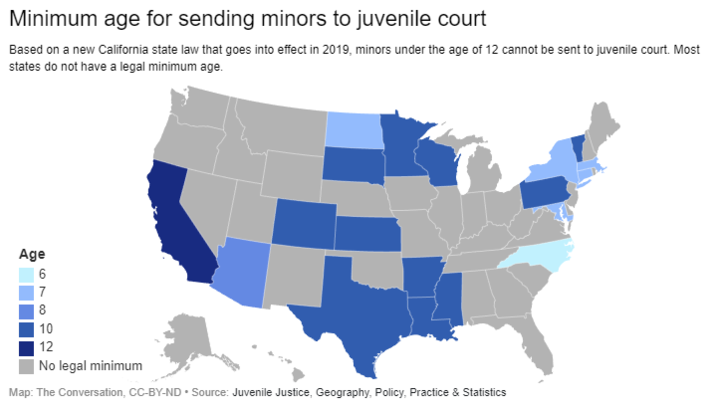 Should Children As Young As 12 Get Locked Up For Committing Crime?