From the Campaign | Raise the Age NY 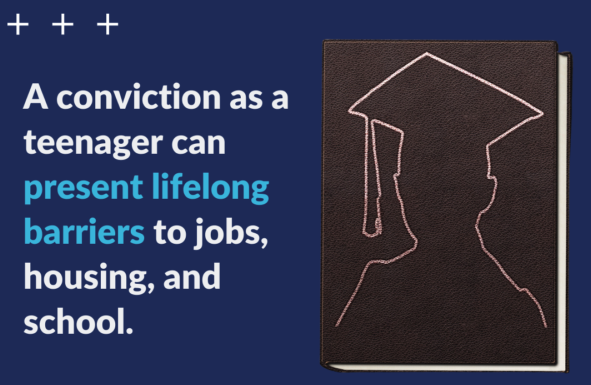 June 10, 2021 – The New York State Senate and Assembly have passed S.282 (Myrie) / A.6769 (Hyndman), legislation providing people who were eligible for youthful offender (YO) status but denied in the past a new opportunity to apply for it. The measure is an important extension of the 2017 “Raise the Age” law.

Championed by Senator Zellnor Myrie and Assemblymember Alicia Hyndman, the bill was also endorsed by the Black, Puerto Rican, Hispanic & Asian Legislative Caucus as part of a robust commitment to Expanding Youth Justice in New York.

No individual should be interminably judged for a conviction, especially one that they received as a teenager. But for young people who were denied youthful offender status at the time of their conviction, there is no “second chance” to apply for it. The consequences of adult criminal convictions disproportionately impact Black, Latinx, and other youth of color. They also exacerbate existing racial inequalities. This legislation allows a person who has served their sentence to apply for a new YO status determination, and for a court to provide relief from the civil consequences of a criminal conviction imposed during adolescence. It is an important first step toward expanding protections for young people tried as adults in New York and towards ending the perpetual punishment of New Yorkers with convictions. It also allows people who were convicted in adult court at age 16 or 17, before New York’s Raise the Age law went into effect, an opportunity to seal those convictions.

“We should be doing everything we can to help young people who have been tried as adults to succeed and meet their goals, not putting barriers in their way,” said Senator Zellnor Myrie who sponsored the legislation. “This bill is an important step toward allowing young people to move on from convictions and access to employment, housing, education and other opportunities.”

“Youth should be treated as youth in our legal system,” said Assemblywoman Alicia Hyndman (D-Rosedale). “This legislation will give people convicted before they turned 19 a crucial second chance to leave the stigma of a criminal record behind. I would like to acknowledge my colleague Aravella Simotas for her relentless advocacy for this legislation over the years.”

“Everything we know about young people tells us that they continue to grow and mature well into emerging adulthood,” said Assemblymember Michaëlle Solages, Chair of the Black, Puerto Rican, Hispanic & Asian Legislative Caucus and a co-sponsor of the legislation. “This bill takes a small but important step toward aligning New York’s youth justice system with the growing scientific consensus about youth development by allowing people who were convicted as teenagers a second chance to have their records sealed. Protecting young people from the consequences of adult convictions, along with further expansion of protections for youth tried as adults, are priorities for the BPHA Legislative Caucus because they are necessary to advance racial equity and economic justice in New York.”

“As someone who fought for Raise the Age and has been advocating for young people in the system for over a decade – and who has been impacted myself by the stigma of a felony record – I thank the legislature for passing this important bill,” said Aminta Williams, Founder and Director of Triple FFF, Flowers Fearlessly Flourishing.

“At Youth Represent we have worked with countless young people who, because they received youthful offender status, have been able to leave the stigma of a criminal conviction behind as they pursue education, employment, stable housing, and other goals,” said Kate Rubin, Director of Policy at Youth Represent. “Young people can be denied youthful offender status at sentencing for all kinds of reasons, and whether it is granted is often a matter of luck and privilege – which county you’re arrested in, which judge you’re before, the depth of support and services available, and the color of your skin. This legislation takes an important first step towards expanding youthful offender protections by allowing young people who were denied them at sentencing the chance to apply for reconsideration. It also provides an opportunity for record sealing to people who were convicted in adult court as teenagers before Raise the Age was enacted. We thank Senator Myrie, Assembly Member Hyndman, Assembly Member Solages, and the Black, Puerto Rican, Hispanic & Asian Legislative Caucus for championing this bill, and we urge the Governor to sign it immediately.”

“When young people can succeed, communities thrive. Expanding youthful offender protections builds on the Raise the Age law and removes barriers that get in the way of jobs, school and housing. Now, more than ever, we need our youth at the center of our economic recovery and community well-being. This bill is an important step towards that goal,” said Julia Davis, Director of Youth Justice & Child Welfare, Children’s Defense Fund-New York. “Now, the governor should sign it into law.”

“This is a significant win the fight for youth justice and greater race equity in New York. Criminal convictions too often lead to lifelong barriers to economic security. Providing a second chance for youthful offender status will lead to expanded protections for young people and remove significant barriers to employment and self-sufficiency. Citizens’ Committee for Children thanks the NY Senate and Assembly for achieving this important reform,” said Jennifer March, Executive Director of Citizens’ Committee for Children.

“When a judge grants YO status to a teenager at sentencing, the Court uses its first and only chance to recognize their youthfulness by removing the lifelong barriers of a felony conviction to accessing work, housing, vocational licensing, and obtaining loans,” said Chris Pahigian, Executive Director of the Youth Justice Network. “Second Chance for YO offers courts an opportunity to reconsider five years later and offers adolescents the time to mature into adulthood. Second chance for YO is courageous legislation which reflects the will and has the capacity to promote racial justice over time. We applaud the Assembly and Senate for its passage.

For more than 30 years, Youth Justice Network has worked with NYC’s adolescents and young adults in their transition home from custody – in their attempts to get work, find a place to live, pursue a vocational license. The consequences of a criminal conviction on one’s record – on a young person of color’s record – are permanent. Second Chance for YO will ease that permanent pressure for some, facilitating young adults’ opportunity to exercise their full potential. As complex as it was to develop and weigh, this law is simple to its core, and it is just.”

“Westchester Children’s Association applauds New York State lawmakers for passing the Second Chance for Youthful Offender bill,” said Allison Lake, Executive Director of the Westchester Children’s Association. “It is good to see legislation catch up with science. Thanks to your leadership and leveraging of this moment for true criminal justice reform, we are confident that individuals will no longer be interminably judged for the worst thing they have done during their young years and rather for all they have to offer throughout their life.”

“Youthful offender adjudication is a critical protection against lifelong negative consequences for young people who are prosecuted as adults in our criminal legal system,” said Nancy Ginsburg, Director, Adolescent Intervention and Diversion Project at the Legal Aid Society. “We call on Governor Andrew Cuomo to sign the legislation immediately into law.”

“A conviction record can result in the lifetime of barriers to opportunity—it’s a perpetual punishment that takes an enormous toll on individuals, families, communities, and our entire economy. We applaud the New York State Legislature for recognizing that people convicted as youth deserve another chance to have their records sealed,” said Alison Wilkey, Director of Public Policy, John Jay College Institute for Justice and Opportunity.

The Center for Family Representation applauds the NY State Senate and Assembly for passing the Second Chance for YO Act (A.6769 (Hyndman)/S.282 (Myrie)). People convicted of crimes in adolescence deserve a second chance to erase the stigma and harsh civil consequences of a criminal record after their sentence has been served. We call upon Governor Cuomo to sign A.6769/S.282 as a step to address existing racial inequalities and allow people convicted during their adolescence greater opportunities to access and keep jobs, housing, loans, credit, and education. 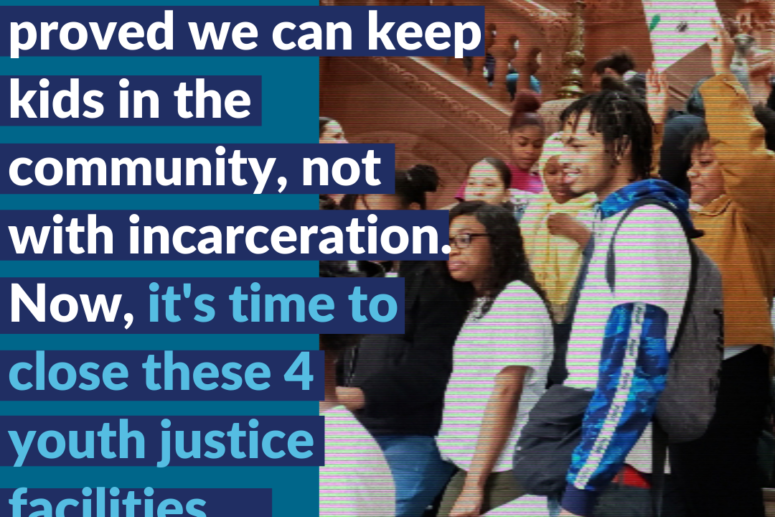 Raise the Age NY Calls for Closure of 4 Juvenile Facilities 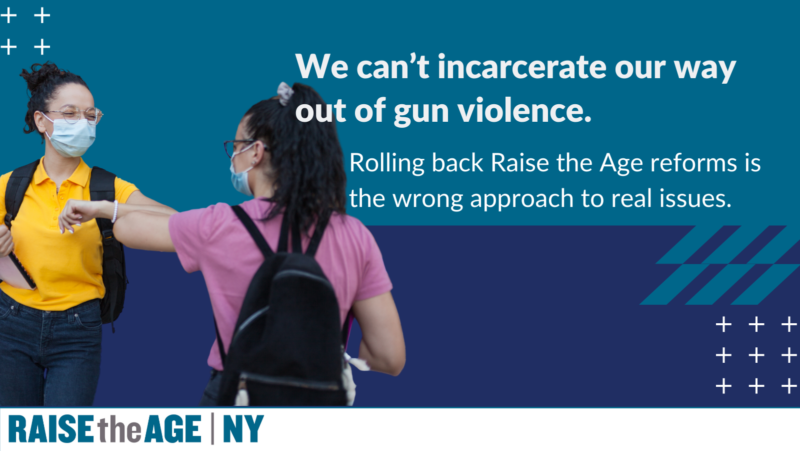