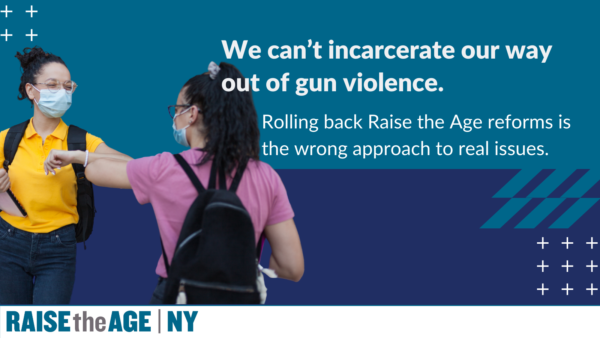 Are you a NY-based organization? SIGN ON TO Our #NoRollbacks LETTER

Calls for Real Solutions to Gun Violence, not Scapegoating Teenagers

Statement from Children’s Defense Fund-NY, Citizens Committee for Children, Youth Represent, and Families Together on behalf of the Raise the Age coalition

In response to reports of last-minute proposals to include rollbacks to New York’s Raise the Age legislation in state budget negotiations, the Raise the Age Coalition calls on the Governor and legislative leaders to reject any proposals to dilute the historic youth justice law and to advance and invest in public safety solutions that address the root causes of gun violence. Rolling back reforms that are working for young people and communities is not the remedy.

Rolling back Raise the Age will not make New York safer. While it is clear that the uptick in gun violence is an epidemic that requires action, the Raise the Age law is not responsible for this crisis.  During the first eighteen months of the implementation of the Raise the Age law, shootings in New York City remained the lowest they have been in decades, even as arrests and incarceration of 16- and 17-year-olds declined dramatically. Only after months of COVID-19 infections, deaths, and lockdowns, did gun violence increase in New York. To consider roll-backs to Raise the Age would not only undo vital criminal justice reform, but would deflect attention and action away from the root causes of this problem.

Rolling back Raise the Age will not make New York safer … but would deflect attention and action away from the root causes of this problem.

Thankfully, we have robust research on the reasons young people carry guns and the kinds of interventions that would reduce gun violence.  This starts with ensuring that full funding for Raise the Age is reaching communities, which has not happened in the five years since the law went into effect.  It also means continuing to invest in a public health response to gun violence and expand investments in a wide range of community-based resources for youth, without undermining those investments with policies that criminalize them.  Our young people need access to education, employment, affordable housing, behavioral health care, and initiatives to combat community-level violence must be rooted in community and led by and with youth.

New York’s shameful history of charging all 16- and 17-year-olds as adults prior to Raise the Age confirms that doing so doesn’t make us safer. This is evidenced by the fact that gun violence in New York City was even higher in the 90s and early 2000s, when all 16- and 17-year-olds were prosecuted as adults. It didn’t make us safer then, but it did lead to drastically disproportionate arrest, prosecution, and incarceration of Black and Latinx youth. Charging more teenagers as adults won’t make us safer now; it will worsen and perpetuate existing systemic race disparities in our society and make us all less safe.

When a 16- or 17-year-old is arrested with a gun in New York, the goal should be to stop that young person from carrying guns in the future – not to punish him or her as an adult.  Family Court provides targeted age-appropriate resources to meet this goal, including intensive case management, family therapy, probation supervision, short-term detention, and long-term placement in a residential facility.  If the young person is charged with displaying the gun or causing significant physical injury, the case will be kept in the Youth Part of adult criminal court under the current law.

Young people across New York are looking to our elected leaders to stand up, defend, and take the charge in leading us out of the COVID-19 crisis with lasting solutions and real investments in youth and healthy communities. We must not meet this moment by going backwards and returning to historically failed, retrograde policies that target Black and Latinx youth with adult prosecution –  this will only cause harm to youth and communities and impede the equitable recovery that our state urgently needs.

Organizational Sign-On: No Rollbacks to Raise the Age Reforms